It Takes a Community to End Domestic Violence

Meet the 2017-2018 Peer Champions for the Immigrant and Refugee Communities - Neighbours Friends and Families Campaign.

Often, the people who are closest to a woman living with abuse can help her the most. Al O'Marra, the former Chief Counsel of the Coroner's Office of Ontario, has said that "in almost every case of domestic homicide, we found that the people around the victim knew what was going on - but didn't know what to do about it."

That is one of the reasons why it is so important for community members to know the signs of domestic violence and how to offer support. If the neighbours, friends or family members of a woman who is being abused know how to support her, her situation can change.

So how do we create communities with the knowledge and skills to support survivors of domestic violence?

The Immigrant and Refugee Communities - Neighbours Friends and Families Campaign aims to do just that. By running informative community education events, the Campaign will spread useful knowledge on responding to domestic violence in immigrant and refugee communities across Ontario.

But immigrant and refugee women are powerful - we can recover, heal, and go on to thrive after abuse. This is especially possible if we have support from our own ethnic, cultural, religious, or linguistic communities. That is why it is so important to have a Campaign that is run by and for our own communities.

The main strategy of the Campaign is to have passionate community members - who we call Peer Champions - take on this issue. These Peer Champions will hold events in their communities to build knowledge, action and leadership on domestic violence.

We've selected an amazing group of Peer Champions for the 2017/2018. They will be hosting events across Ontario this year! Let's meet them now: 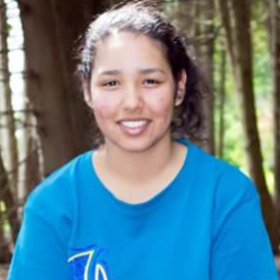 Tamanpreet is a daughter of the Punjabi-Sikh diaspora. She is an activist and an active community member. She is a grassroots organizer that focuses on increasing the level of interaction of youth of colour and community change. On her time off, she enjoys the company of friends and family and conversations of how as and community they can better the environment through a justice-for-all lens. 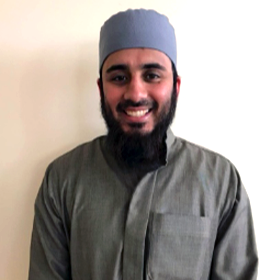 Mohammed is the Imam of Newmarket, and serves diverse communities of newcomer Muslims in that area. He brings a background in counselling and trauma-informed care, and has a passion for leading conversations on abuse and domestic violence as a community leader. He speaks Urdu, Gujurati, and English. 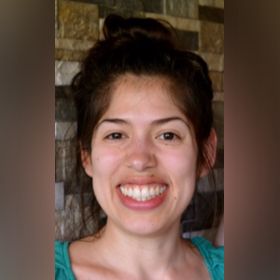 Gisell is completing her graduate studies at Carleton University in social psychology. She has worked on several research projects concerning university students, youth involved with the legal system, newcomer women, and Nicaraguan communities. Her research on community perceptions of violence against women in Nicaragua sparked an interest in the needs ofLatin American communities within the Ottawa region. She speaks English and Spanish and strives to use participatory tools and approaches(e.g., Theatre of the Oppressed, visual mapping, photo voice) in her projects. 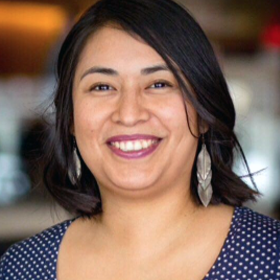 Patricia is deeply involved with grassroots Latin community groups in the Ottawa region and brings connections to the Peruvian embassy. She comes with community engagement experience from Peru and in Ottawa,and organized Ottawa region events for #NiUnaMenos (Not One Less), international and non-political women's movement to fight gender violence in Peru. She speaks Spanish and English. 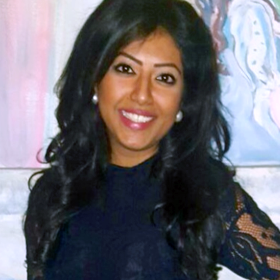 Tharshiga is a Registered Psychotherapist that holds a B.A. (Hons.) in Psychology from York University and an M.A. in Counselling Psychology from McGill University. Tharshiga is a Women's Substance Abuse Therapist at Addiction Services for York Region. She is also the co-founder of ANBU which loosely translates to Love in Tamil and stands for Abuse Never Becomes Us. ANBU is a Toronto based not-for-profit community organization that works with survivors of childhood sexual abuse within the Tamil community. Tharshiga and Jenny Starke (Co-founder) are Tamil speaking women with lived experiences of childhood sexual abuse that recognize childhood sexual abuse as a global issue but identify and relate to the Tamil community's historical and present trauma and believe in building and exploring the collective capacity to heal. Tharshiga is driven by her experiences that continue to fuel her passion for love and the extinction of sexual violence. #SpreadANBU 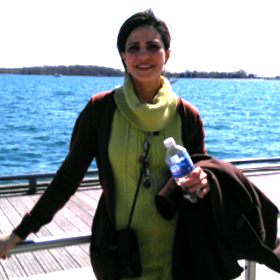 Yassmin was a teacher and administrated the Lattakia branch of Al-Sakhra, a charity in Syria for families affected by war, before she arrived in Canada one year ago after escaping war. Yassmin has a driven passion for helping people and allowing their inner light shine. She speaks English and Arabic. 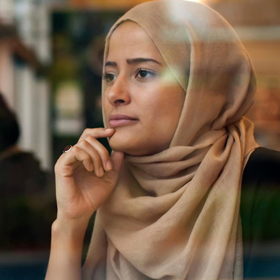 Sakinah is a 27 year old Afro-Trinidadian, Native American, multi-ethnic Muslim woman, born and raised on Turtle Island. She is an artist who uses her writing and voice to speak up for truth and justice. Striving towards her role as a healer she centers her learning around holistic health and wellness, healing from trauma, mental illness as spiritual gifts, and is focusing on grounding herself in her own healing and spiritual practices. 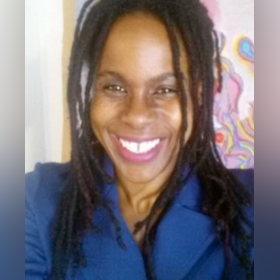 Althea has created arts-based workshops on self-care, mental health and wellness for some of the most vulnerable women in Toronto. She is the founder of the "The Creative Art of Being" and co-founder of the Parkdale Walking Group, a safe space for authentic conversations, connections, and increased well-being. She is committed to community development and social change, an advocate for peer support and has a passion for reaching diverse communities to facilitate heart to heart exchanges on gender violence. 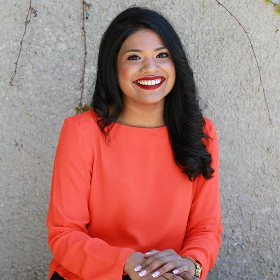 Chenthoori is a daughter of the Thamil diaspora. She is a care-giver, activist and grassroots organizer from Toronto with a Bachelor's degree from York University in Sociology & Womyn Studies. Utilizing alternative platforms such as arts, education models she designs and facilitates workshops with METRAC's violence against women and youth organization in schools throughout Toronto on issues revolving around gender base violence. In her spare time she enjoys spending time with family, her special puppy and constantly striving to make this world a safer place. 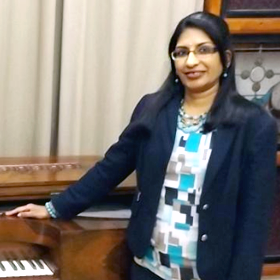 Anita (B.Sc, LL.B) is a proud Indian Canadian currently working as a Residential Counsellor at Nova Vita Domestic Violence Prevention Services. She has been involved with the Community Legal Clinic-Brant, Haldimand and Norfolk (Board of Directors) and the Brantford Library for the Human Book project. She has been a Team Leader for teen Esteem and a speaker for Passages to Canada. Anita enjoys photography, painting, music, movies, nature and cooking. She speaks multiple languages including English, Hindi, Malayalam, Nepali, Bengali and few other Indian languages. 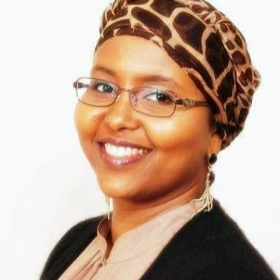 Hodan (BA- UofT), M.A. -OISE) is a diaspora Somali Canadian with a focus on community researcher, public policy, leadership facilitation, and youth employment. She has over 9years of international fieldwork, community development, anti-Black racism and youth advocacy working with underserved and underemployed Black youth in Toronto. She tweets at @q_huda. 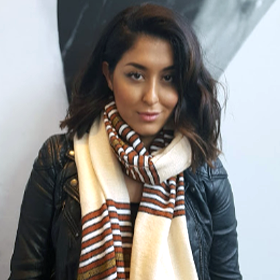 An advocate for ending violence against women, both locally in my region of Peel and more widely in my Afghan diasporacommunity in Ontario. My goal is to build social policies and programs that remove systemic barriers and reflect the needs of the most vulnerable people in our society. I enjoy developing research through anIntegrative Feminist Anti-Racism/Anti-Oppression framework that focuses on the lived realities of women and marginalized folks. I hope to use this opportunity to reach out to Afghan women who are newcomers to Ontario, and are experiencing violence in its many shapes and forms. I also hope to reach out to the neighbours, families and friends of women who are experiencing violence, and equip them with the necessary resources to help the women in their lives. 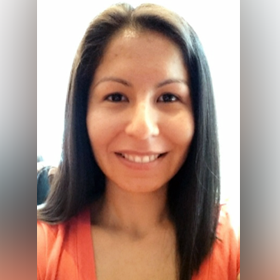 Nathalí was first motivated to fight against violence when she saw children her age begging or selling candies or services in the streets of Lima. Over the years, her personal experiences of violence and their impact on her life have led her to study the subject within international contexts, to work with survivors of war and to become active in the community to advocate for victims of gender violence. Her biggest dream as a Peer Champion is to see victims of violence thrive as survivors to the greatest extent possible. 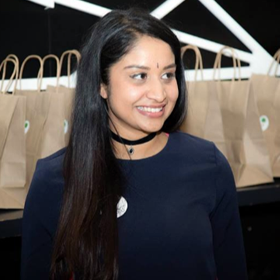 Jessica is a Thamil woman that currently serves at the Treasurer for Abuse Never Becomes Us (ANBU), which is an organization that serves Thamil survivors of childhood sexual abuse. She holds a Master's in Sociology with a focus on sexual violence. She is passionate about educating those around her about violence against women, and supporting those who have survived violence.